REYKJAVÍK ON STAGE – AN ADVENTURE IN ICELANDIC MUSIC

REYKJAVÍK ON STAGE – AN ADVENTURE IN ICELANDIC MUSIC

Reykjavík on Stage, the first ever English-language magazine entirely dedicated to Icelandic music, released its second issue for the enjoyment of Icelandic music fans all over the world. Following the success of the first issue published in July 2017, the editorial team behind the magazine decided to keep the adventure going in order to deliver the best of the Icelandic music scene to the international crowd.

Reykjavík on Stage is the brainchild of Justyna ‘Stína Satanía’ Wilczyńska, who started her career as a musical journalist in Poland. As a regular contributor on muzykaislandzka.pl, she did her best to bring Icelandic music news to the Polish audience for several years. After moving to Reykjavík and noticing the lack of English-language media available about Icelandic music, she decided to launch her own magazine and share her passion. Reykjavík on Stage was born. In order to make this dream of hers a reality, Stína recruited two very talented writers. Bartek Wilk was an obvious choice. He is an administrator and co-founder of the Polish Sigur Rós fan forum sigur-ros.art.pl and creator of muzykaislandzka.pl. Their extensive work and writing experience together as well as their common passion for Icelandic music made them the ideal teammates. Wim Van Hooste, a bona fide expert in Icelandic music with almost 30 years of experience as a musical journalist, was a perfect addition to the duo. Writing for numerous blogs (I <3 Icelandic Music) and websites (ROKmusik.co) about the Icelandic scene gave him the skills and expertise needed to make Reykjavík on Stage the best source of Icelandic music news around. With a few other contributing writers and editors added to the mix, the magazine quickly took shape. 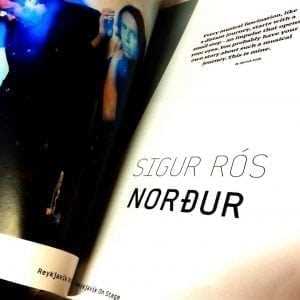 After a first issue covering among other things the career of Icelandic musical polymath Ragnar Ólafsson, Stelpur Rokka! rock camps and the life and times of punk band Unun, Reykjavík on Stage is now keeping the flame alive. Issue n°2 covers the band Mammút, goes over the 2017 edition of the Iceland Airwaves festival and touches upon Icelandic gentle giants such as Sigur Rós and Björk. The international team of writers behind the magazine will deliver a variety of perspectives on Icelandic music and help readers feel the scene’s fiery pulse under its icy surface. Reykjavík On Stage was born from a shared passion for Icelandic music. Its sleek and professional layout created by talented graphic designer Klara Arnalds makes it a beautiful souvenir, almost a collector’s item. With 70 pages in English entirely dedicated to the Icelandic music scene, Reykjavík on Stage is a real Icelandic travel guide for melomaniacs.

Already available in record stores in Reykjavík as well as on reykjavikonstage.com in single issue and subscription form.