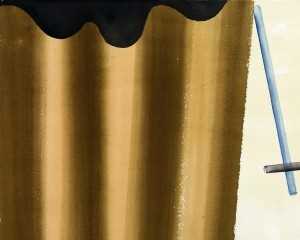 Sathurday March 7th at 15:00 the artist Jón Axel Björnsson will open an exhibition at The ASI Art Gallery.
In 2014 painter Jón Axel Björnsson hung a series of small works on paper in the Mokka coffee house. These works were painted with black acrylic paint on brown paper; together they were  called the Black Box. Contrary to expectations, given the artist`s avowed interest in images of the absolute, this was not a reference to Malevich`s famous black square, but to an actual black cardboard box, systematically deconstructed by the artist. Jón Axel would open up this box, break it up into its constituent parts, mostly irregular squares, which were then transferred on to paper as black silhouettes. In conversations the artists indicated that his deconstruction of the black cardboard box was neither an inquiry into basic geometry or metaphysics, but rather a very personal investigation into the idea of shelter: how we shelter the things and values that are central to our being by enclosing them, within a box, house or a language. In the process depicted in the black box series, the shelter has been dissolved, its infrastructure scattered and its contents lost.

The Mokka series are a kind of rehearsal for the existential quest which characterizes Jón Axel`s current exhibition in the Federation of Labour`s gallery. The dissolution of the shelter, which in the abovementioned exhibition is pursued as an abstract idea, is now staged as a personal existential blow, as well as an essential aspect of the human condition. The main locus of this dissolution is the large central room, where we find three very large paintings, all of which are virtually covered with block-like squares of thickly painted black paint, crowding out rather forlorn single figures at their edges. These substantial and  very constructed squares become images of the shelters, actual or metaphorical, which we build against chaos. In every instance these man-made constructions have turned on their makers, exhausted them or outlawed them. Man the maker has been marginalized, turned into a bit actor on the stage of his own existence, with nothing to hold on but his untrustworthy memories.

Yet this room doesn`t feel defeatist or pessimistic. On a separate wall adjoining the central room with its large paintings we find three much smaller paintings in a Concrete style. Thickly painted, they have a heft and texture belying their size. In fact, they resemble building blocks; perhaps they are the fundament for a new shelter, and thus a new beginning. There`s also another small painting present, almost as an afterthought, but since Jón Axel designs his exhibitions carefully, one is tempted to see in this painting a deliberate musical coda to what has come before. Significantly, it is characterized by bright colours, softness of touch and a discreet reference to the „ewig weibliche“.

In the ground floor gallery the existential conundrum is seen in a broader context. The gallery features Jón Axel`s watercolours which form a part of what I would like to call his Theatre of Unstable Space, an institution which in recent years has featured prominently in his art. These watercolours are populated mostly by single men, isolated and beleaguered, forced into situations that they can neither understand nor master. Their biggest stumbling block is the space that they occupy, since it does not behave in the way that they – our substitutes – are used to. „Actual“ three-dimensional space, the place where all things seem to exist and happen, expands infinitely and eventually merges with cosmic space, where there is no foothold and no certainty of anything. Or conversely, space will contract and turn into a purely personal arena, circumscribed by our emotions, or a black hole, full of objects that threaten to take over our existence.

The lower ground floor gallery is the scene of another theatrical experience. There viewers are invited to renew their acquaintance with sculptures which the artist exhibited at this very same venue fifteen years ago. The sculptures consist of twelve plaster busts, placed on a metal base so that we face them straight on. If the first part of the exhibition revolves around individual existence, the second around the idea of existential space, the sculpture part surely centers on the temporal dimension. For during the fifteen years that have passed since the plaster heads were first exhibited, they have aged considerably – each in his own way – developed wrinkles, sagging folds and other facial blemishes. Before they all came out of the same mould and functioned as the concretizations of the trancendental, not unlike Malevich`s black square. Now they, much like their maker, are subject to „the shocks that flesh is heir to“.
If there is a message embedded in these sculptures, as well as the exhibition as a whole, it is that existence is played out in the here and now, in the flesh, not in the abstract realm of the spirit.