The Brave Get the Best
The Sea Baron’s Fish Meals Attract Visitors from All Over the World
Iceland has many ‘different’ foods which have their roots in seafaring history. The Vikings came up with many novel ways of preserving their foods and their traditions continue to this day. Some of these foods sound unappealing, to say the least, and it takes the adventurous soul to step out and try them. Iceland is for the adventurous and they reap the benefits of the brave. The timid stick to burgers! 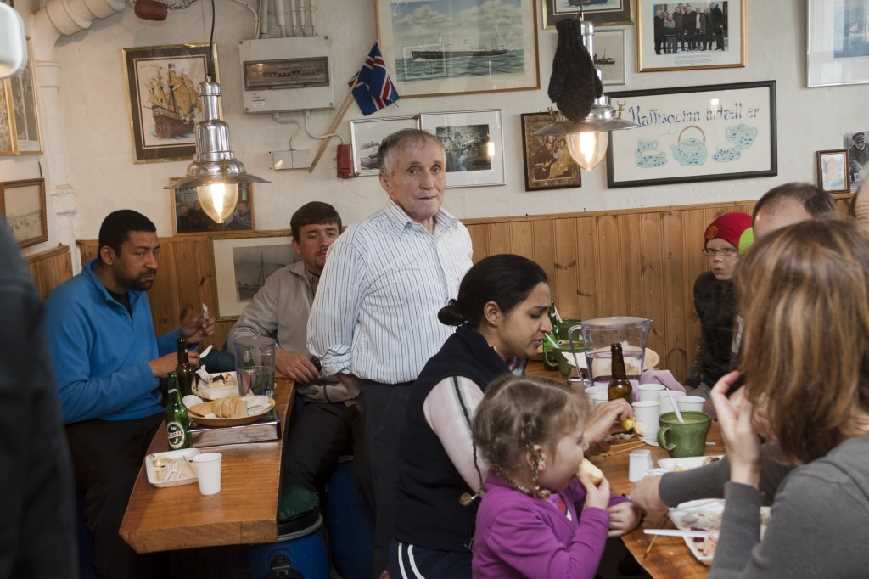 The Sea Baron in True spirit
A former fisherman and Coast Guard chef, Kjartan Halldórsson, also known as the Sea Baron, is the master of unusual fish dishes. His lobster soup, for example, has gained fame around the world, earning it the title of ‘the world’s greatest lobster soup’. While he never revealed the secrets of his recipe, that has never stopped the restaurant from being filled every day with aficionados. He entered the restaurant business by chance. One day, when standing by his boxes of fish, some foreign visitors asked if he could prepare some fish for them. Spotting an opportunity, he ran to the nearest hardware store to buy a grill—and was in business! His visitors were invited to dine in his shop in this improbable restaurant. Word quickly spread and soon he was shifting his boxes out to make room for tables and chairs. He took the unusual and created delicious meals that no one else had thought of. He took old recipes, some of which sounded revolting, and made meals that have established his reputation around the world. 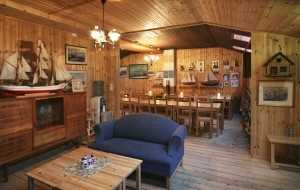 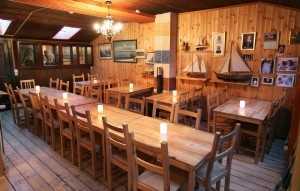 The Passing of the Sea Baron
Kjartan, the true Sea Baron, has recently passed away. But his legacy will surely live on for many years to come. A few years ago, Kjartan passed his mantle on to Elísabet Jean Skúladóttir, an energetic and vibrant young woman who actually bought the restaurant at the Sea Baron’s request. Kjartan wanted to make sure his place would be well taken care of in the future, but he used to joke that, not only did Elísabet make a great investment by purchasing the restaurant, but he was included in the deal himself. Kjartan’s spirit will surely remain palpable as visitors will not only feel his energy but he will actually be there to greet them in the form of a wax sculpture!
Dining as a Seafaring Experience
Kjartan’s restaurant is popular with the fishermen who sailed for many years from Reykjavik. It is filled with memorabilia donated by old sea captains and their families that fill it with a character all its own. Handmade model sailing boats, pictures of ships of the past and stuffed birds fill the second floor’s walls, where groups of up to 35 can celebrate together. Eating at the polished tables, sitting on cushioned fish barrels, surrounded by paraphernalia of the sea, it is an experience that will leave you with both good memories, a satisfied appetite—and perhaps, a rather shocked mind that you would actually have eaten fermented fish and that it tasted so, so good. Moby Dick on a Stick (minke whale on a spear) for example, is a play on words with great impact, delicious and stirring—as are the great variety of other fish spears with a mix of cod, blue ling, salmon, trout, lobster and giant shrimp, to name a few. Also worth mentioning is an Icelandic specialty dish, available at noon on Thursdays, a combination of fermented fish. On the first Saturday of the month they offer skate with heaps of hamsatólg (fried fat), potatoes and rye bread with butter. This delicacy is only available from 1st September – 30th April. For desert, as a true Icelander, one should enjoy grjónagrautur—or rice pudding of sorts, often served with raisins and cinnamon flavoured sugar. Bon Voyage Sea Baron!
The Sea Baron will be missed dearly by all who knew him. His heritage will live on and there is no doubt that his recipes will continue to warm the bellies of both Icelanders and travellers alike for generations to come. This man has surely put his mark on the restaurant landscape and changed the way we perceive a grand dining experience.